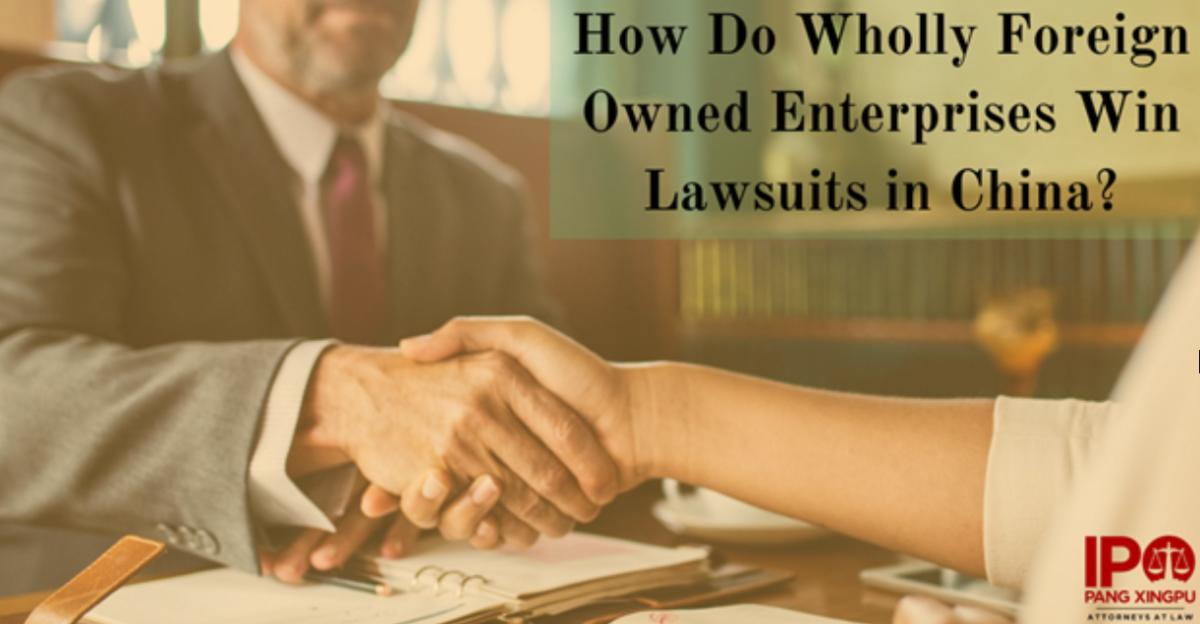 Operating an enterprise in a foreign jurisdiction is a business activity that is rife with potential pitfalls. Most often, foreign enterprises must abide by both the laws of their jurisdiction of origin and the nation in which they operate their businesses. Which laws apply and to what degree largely depend upon the circumstances, but suffice it to say that a breach of criminal or civil law in either a company’s home jurisdiction or foreign place of operation is likely to land the organization in legal trouble. But what should a Wholly ForeignOwned Enterprise (“WFOE”) operating in China do to avoid ending up in court? And if a WFOE does find itself before a Chinese judge, how can the company maximize its chances of winning the case?

Doing Business as a WFOE in China

Many Western companies with long-term plans for engagement with Chinese markets organize as Wholly Foreign Owned Enterprises. WFOES are the preferred vehicle for many international business activities on the mainland because this legal form does not require the same degree of local oversight and engagement as other models common for foreign cooperation in the Chinese economy. In addition to being largely autonomous, WFOEs maintain status as a distinct legal entity with all of the rights and obligations of personhood. This means that Wholly Foreign Owned Enterprises are able to enjoy both the limited liability afforded businesses and the individual rights offered under Chinese civil law.

China offers Wholly ForeignOwned Enterprises a substantial amount of freedom because these entities play an important role in the nation’s economy, particularly manufacturing and technologytrades. Even so, China watches WFOEs closely. The nation oversees many important WFOE activities under the regulatory purview of the P.R.C.’s Foreign Investment Law (“FIL”).The Chinese legislature recently updated the FIL and its Implementing Regulations to further increase the autonomy and decrease barriers to economic participation of WFOEs through preferential policies, thus inviting greater foreign investment and business activities.

Because they enjoy the benefits of autonomy, civil and regulatory protections, and other pro-foreign business policies, WFOE are a popular business model in China for anyone with a long-term plan for participation in the Chinese market. WFOEs are facing a generally positive regulatory environment, but this should not be taken to imply that WFOEs are afforded free reign. Notably, WFOEs are not treated as domestic businesses in Chinese courts. Rather, China’s civil laws carve out a distinction between domestic parties, foreign parties, and foreign investment enterprises.

China has enacted special laws and regulations to standardize the organization and behavior of enterprisessupported by foreign investment. Policymakers have built China’s legal environment to serve a dual purpose: encourage foreign investment and control the impact of foreign interests in China’s domestic economy. For example, China’s High Courts, which are typically reserved for appellate review, are the jurisdiction of first instance for major cases involving foreign parties. Most civil and administrative cases involving only domestic companies are reviewed at first instance by provincial courts and only elevated to High Court review upon appeal.

WFOEs can only be sued in Chinese courts, and foreign disputes have no time limitbut do impose special rules on procedurally significant aspects of litigation, such as fee-shifting awards.

There is no single piece of governing legislation that guides foreign civil litigation in China. Rather, foreign interests litigate their rights pursuant to the processes set forth in several laws, namely the Civil Procedure Law of the People’s Republic of China. Part four of the Civil Procedure Law particularly addresses foreign litigants in Chinese courts, and Chinese courts have supplemented the rules found in these sections with several guiding opinions. According to this portion of the law, “foreign-related” litigation is any dispute brought to Chinese courts involving a Chinese party and a foreign party or two foreign parties. It can even involve two Chinese parties if the legal relationship between them or the subject matter in dispute takes place or is located in a foreign country.

Even when foreign litigants move forward with cases following the Civil Procedure Law to the letter, there are often many potential complexities regarding the circumstances of the case and which laws should apply to the substance of the dispute. For example, contracts executed or carried out on the mainland are governed by the People’s Republic of China’s Contract Law. That is, however, unless one of the parties is of foreign nationality, the subject matter of the dispute is located outside mainland china, or some legal fact is present that establishes, changes, or terminates the legal relationship between foreign and domestic interests. Thus, anyone involved in a Chinese-foreign equity joint venture, contractual joint venture, cooperation in exploring and exploiting natural resources, or any othersuch contractual agreements should be prepared to litigate as a foreign party in Chinese courts.

Litigating as a Foreign Party

Directed by national policy favoring foreign economic investment, Chinese courts are growing increasingly accessible allies for WFOE’s legal interests. Even so, the circumstances that land a party before a Chinese High Court in foreign-related litigationmust be particularly favorable in order for a WFOE to have a high chance of winning its claim.

Over the past five years, only a handful of high-profile cases involving foreign interests resolved with a WFOE prevailing. Most of these claims involved labor disputes, such as the 2018case of Chen Haidong v. Coca Cola Shanghai. This litigation involved an employee’s claim to compensation for untaken annual leave after the WFOE terminated the employee’s contract. In this case, the courts ruled in favor of the defendant WFOE, deciding that the foreign-owned employer was not required to compensate the terminated employee for untaken time off. Similarly, in the case of Shanying v. Shanghi Hewlett Packard Co., Ltd., Chinese courts sided with the defendant WFOE and decided that the company should not be required to pay severance on the termination of a labor contract.

Overall, Chinese courts have demonstrated a willingness to decide in favor of WFOE litigants involving labor and employment issues or issues likely to impact international trade. In the case of GreenTree Inn (China) Co. Ltd., v. Jiangsu Zhonglai Hotel Management Co., Ltd. filed in 2016, a WFOE was awarded economic damages and attorneys fees after the domestic company unilaterally terminated its franchise contract with the WFOE but carried on doing business under the franchise brand. This case highlighted the evolving intellectual property rights WFOEs are experiencing in China’s increasingly foreign-friendly civil litigation laws.

Even as Chinese courts have started to open up when it comes to WFOE litigants in employment and intellectual property cases, foreign litigants seldom prevail in many other common types of commercial litigation, such as contractual disputes. Only one recent litigation involving a WFOE defendant, Nike Sports (China) Co., Ltd. V. Guangzhou Xieli Sporting Goods Co., Ltd., filed in 2014 that did result in a noteworthy judgement in favor of a WFOEin a contract dispute.Still, the foreign litigant prevailed on only one claim while its domestic opponent won several. Between the complexities of the applied law and the general difficulties of navigating Chinese courts, many potential WFOE litigants turn to alternative dispute resolution as a means of enforcing their legal rights.

In China, most foreign-related disputes are handled through arbitration. Foreign-related arbitrations are largely administered by China International Economic Trade Arbitration Commission (“CIETAC”) in Beijing, Shanghai, and Shenzhen. The CIETAC has already overseen the arbitration of more than 10,000 cases, and this figure is on the rise. The body has built itself up as a respected presence within the international community, and today the CIETAC is generally well-regarded as independent, impartial, professional, speedy, and efficient. As a result, many WFOEs elect arbitration over litigation in China when they have the luxury to choose.

There are a number of strategies WFOEs can utilize to maximize their likelihood of success before the CIETAC or other arbitration venue. First and foremost, WFOEs should maintain robust arbitration agreements with all of their operational partners in China. Because the implementation and enforceability of international arbitration agreements is a matter left up to international laws rather than domestic Chinese policy, arbitration can be more of a level playing field for foreign parties embroiled in disputes that may weigh on China’s economic or social interests. In fact, arbitration agreements executed by WFOEs doing business in China often include “choice of law” and “choice of venue” terms that allow foreign interests to file claims under the laws of their home jurisdictions.

If a WFOE has suffered a violation of its legal rights under circumstances covered by an arbitration agreement, the WFOE files an application for arbitration rather than a claim for litigation. Even so, both litigation and arbitration involving a WFOE in China must comply with China’s Civil Procedure Law and other domestic laws that apply to the circumstances. The insight and expertise of local counsel in this respect is invaluable.

How Do WFOEs Win in Chinese Courts?

WFOEs embroiled in litigation in China’s courts of law can maximize their chance of success by engaging skilled, knowledgeable local counsel with knowledge of both domestic and international laws. Chinese lawyers experienced in helping WFOE clients navigate China’s legal systemhelp bridge informational and communication gaps. Any of these potential pitfalls can easily cause a WFOE to lose a legal claim that it had every right to make and by all means should have prevailed upon. As such, any WFOE facing litigation in China would be wise to engage local counsel knowledgeable in both western and international legal conventions and China’s legal culture.

IPO PANG XINGPU, with headquarters in Shanghai China, we have been helping clients from all over the world with their legal matters since 1992. We are a group of dedicated attorneys and professionals with expertise and experience in a variety of legal disciplines.  Clients come to us "When Being Right Matters®".

Thank you. Your submission has been sent.