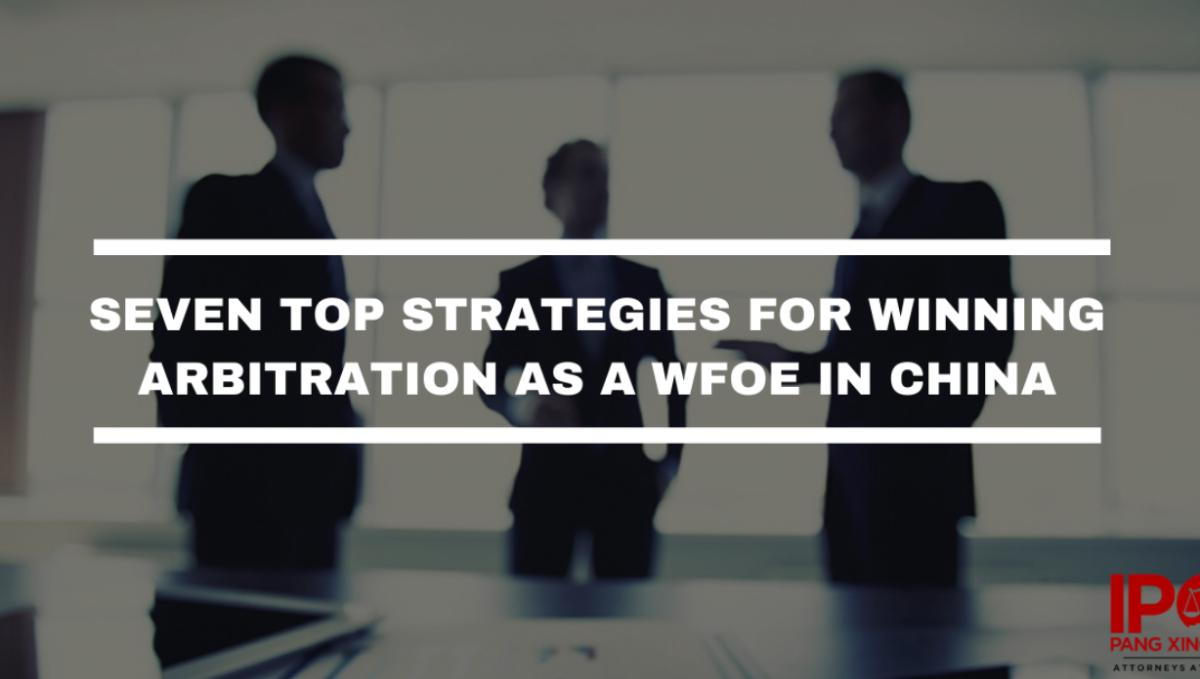 Arbitration has been on the rise in China. Over the past few years, the China International Economic and Trade Arbitration Commission (“CIETAC”) has reported a rapid growth in commercial arbitration cases in China. Many of these arbitrations have involved wholly-foreign owned enterprises (“WFOEs”) engaged in the economic and infrastructural transformation the nation is pushing forward through the Belt and Road Initiative. The multinational economic collaboration necessary to support these and other national development efforts are leading to a more open and arbitration-friendly legal environment.

Much of the world views this opening of alternative dispute resolution options in China as a positive development. Arbitration proceedings encourage participation and cooperation in a manner that encourages peaceable and mutually acceptable resolution of disputes. Because it avoids some of the cost, time, and hostility involved in taking issues to court, many parties prefer arbitration over litigation. However, this preference rests upon the assumption that the party is in a position to win on at least some of the issues under arbitration. Such an observation begs the question of just how a WFOE can win arbitration in China.

“Know the enemy and know yourself; in a hundred battles you will never be in peril.”

This is a quote from famed philosopher and strategist Sun Tzu that is repeated often in war rooms – military and corporate alike. But despite how important it may be to understand the participants in a battle, it is nearly impossible to win any conflict if you march into a battlefield blind. As such, winning any arbitration case in China starts with understanding Chinese arbitration law.

The Arbitration Law provides that arbitration shall take place by mutual agreement, and that agreements for arbitration must be in written form. These writings must state the general terms the parties consent to regarding arbitration expressly and in a tangible form that is available to all parties.

In lieu of a court, China’s Arbitration Law places decision making authority in the hands of arbitration commissions. As such, arbitration commissions act as the finder of fact and law during the arbitration process. However, courts are not entirely removed from Chinese arbitration practices. If arbitration agreements do not abide by the standards described above, for example, an agreement for alternative dispute can be set aside or deemed non-enforceable by a reviewing judicial court. The Arbitration Law also requires arbitration commissions to forward a party’s application to a competent court for determination of interim measures – that is, those issues which create uncertainty regarding final resolution if left unaddressed in the interim. Even so, arbitrating disputes in the People’s Republic of China allows parties to avoid the courts to a large degree. This helps reduce the risk of mutually undesirable outcomes, interference from intervenors, and unwanted publicity while parties are resolving issues.

After parties to a potential arbitration gain a clear understanding of the international, national, and local laws and policies that pertain to them, their attention must turn to strategy. Of course, an effective strategy must be tailored to the circumstances. But a few battle-tested arbitration strategies have withstood the test of time. Here are seven top strategies for winning arbitration as an WFOE in China:

1. Decide Whether You Even Want to Agree to Arbitration in the First Place

There are several advantages to using arbitration to settle disputes. Arbitration procedures are more flexible and less formal than litigation. Arbitration also allows the parties a substantial degree of control over the process, such as the opportunity to select an arbitrator. Parties can choose an arbitrator based on his or her experience, viewpoint, or other characteristics the parties believe makes this person best suited to take their case. This degree of latitude over the selection of the presiding decisionmaker is never available to litigants in court. Arbitration also takes less time and the pace of the procedure is set by the parties. This is often more convenient, and unlike public court arbitrations are confidential. This means there is less publicity, and parties do not risk exposing themselves or their companies to any negative reputational impacts during the procedure or over the outcome.

The enforceability of arbitration agreements is arguably the most attractive aspect of the process to WFOEs. Foreign court judgments are harder to enforce internationally, whereas arbitration outcomes are far easier. This is possible thanks to the United Nations Convention on the Recognition and Enforcement of Foreign Arbitral Awards, a 1958 international law that makes arbitration agreements much easier to enforce and implement across jurisdictions.

There are many advantages to arbitration, but the process has its disadvantages as well. First, an arbitration decision is conclusive and final, meaning that there is seldom any opportunity to an unfavorable or unfair outcome. Also, while arbitration is usually less expensive than litigation, the cost of arbitration is less controlled and could be greater than court cases in certain circumstances, such as in contract disputes. And while confidentiality can be a good thing in sensitive situations, too much secrecy in an arbitrated case could be a disadvantage for some parties. As a result, parties should think twice before agreeing to an arbitration.

The best offense is usually a strong defense. Thus, one top strategy for an WFOE looking to win arbitration in China starts in the strength of the original arbitration agreement. A sound arbitration agreement must be validly executed, and entered into by individuals with full civil capacity or by legal persons. At a minimum, it should include:

Any deviation from these provisions renders the entire process invalid just as procedural irregulates and substantive reasons can invalidate judgements.

In addition to following these mandatory requirements, a solid arbitration agreement in China should state the default rules for ascertaining circumstantial details, such as the time and location for the arbitration and the language it is to be carried out in. In these cases, it is particularly helpful to work with a Chinese lawyer with strong western ties that can bridge any potential language gap and select a favorable local venue.

3. Know How and When to Commence an Arbitration Application

This application must be commenced within any time period or similar condition precedent provided for in the arbitration agreement or governing law. Typically, arbitration agreements limit potential claims to some limitation period, which begins the moment an aggrieved party knows or should have known their right was infringed upon. For example, in one recent arbitration case a Korean investor brought against the P.R.C. itself (Ansung Housing Co v. People’s Republic of China, ICSID Case No. ARB/14/25), the application was dismissed as untimely. The three-year statute of limitations that led to the dismissal was imposed under a 2007 China-Korea Bilateral Investment Treaty, so any WFOE that may be engaging in arbitration in China should take special care to take note of all governing laws and treaties.

In all domestic arbitration cases, Chinese law automatically applies. However, when WFOEs or other foreign interests are engaged, parties can generally decide which jurisdiction’s law to apply to the merits of a dispute. However, one key exception to this choice of laws applies: when a foreign law applied to the case would threaten the social public interests of China, it is barred. In these cases, China’s laws will apply regardless of any agreement between the parties to the contrary.

The Applicable Law to Foreign-related Civil Relations sets out rules by which judges or arbitrators may decide what law to apply to a dispute. Generally, this is as simple as reviewing the choice of law term in the arbitration agreement. However, if the contract is silent about which laws govern the dispute, the laws at the habitual residence of the party whose obligations can best reflect the characteristics of the contract, or the laws that have the closest relationship with the contract, will apply. This is not always naturally intuitive, which is another reason why parties to an arbitration should work with counsel knowledgeable about the laws of China as well as their native jurisdiction.

5. Measure the Arbitrability of Your Case

Notably, copyright and security transaction disputes may be resolved through arbitration, but cases like these should be reviewed for their suitability for arbitration by a Chinese lawyer prior to filing an application.

A strong case in an arbitration institute will furnish evidence to prove all allegations asserted. All evidence must be verified before it is admitted into the facts. It is up to the arbitral tribunals to decide the admissibility, relevance, and weight of the evidence presented.

Admissible evidence is regulated by China’s Civil Procedure Law and includes the following:

7. Ensure the Arbitration Outcome is Enforceable

Under China’s Arbitration Law, several statutory requirements must be met for the arbitration decision to be valid and enforceable. Examples of circumstances that invalidate an order or agreement pertaining to an arbitration include:

There are countless other circumstances that may result in an arbitration judgement being unenforceable. In these cases, even an agreement to arbitrate is more trouble than it’s worth. To avoid the potential pitfalls of Chinese arbitration and maximize your chances of success, be sure to hire top-notch local counsel. Our skilled attorneys have the international skillset that WFOEs need to bridge communication gaps and avoid unforeseen issues in arbitration cases, so reach out to our offices before your next trip to the arbitrator’s office – at the end of the process, you’ll be glad you did.

IPO PANG XINGPU, with headquarters in Shanghai China, we have been helping clients from all over the world with their legal matters since 1992. We are a group of dedicated attorneys and professionals with expertise and experience in a variety of legal disciplines.  Clients come to us “When Being Right Matters ®”.

Thank you. Your submission has been sent.